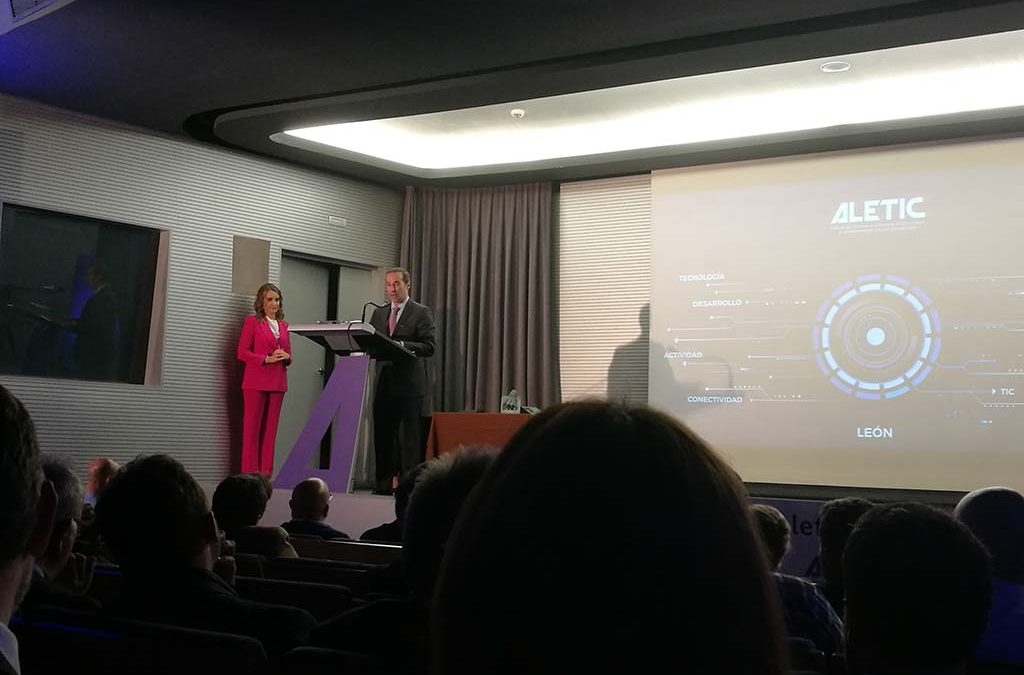 León’s Association of Technology Companies rewards the initiative of people and companies leading projects which are fostering the economic and technological development of our province.

Last night, Aletic celebrated the second edition of the awards that bear its name in a bid to defend the interests of the companies related to technology and the computing sector.

The ceremony started with the speech by the mayor of León, Antonio Silván. After his speech, Pablo Peláez, CEO of Plain Concepts, highlighted in his talk “León, cradle for technology” the importance of talent. For him, “there is a need to invest in talent, not only looking for it; if you generate it in your own city, this will encourage companies to come to León”.

The first participants who received the award were the students of the Integrated Vocational Training School CIFP Virgen del Buen Suceso for their project Mochila Inteligente Systems Intelligent Lionin the category of Young Talent. These young researchers opt for a type of technological development in the service of society. For them, this bet creates value, and “we all should push for the province’s young people to have a future”. They stated that there is a great deal of talent in the province, “we only need to believe in it and promote it”.

The award for the project Innovating for León was to El Bierzo region, more specifically to Miguel Martínez, chef and owner of the restaurant La Tronera. He received this award for his project Botillo 2.0., handed by Juan Martínez Majo, president of the Provincial Council of León.

The award for the Best Innovative ICT Company was to Hilo Verde Innovaciónfor its project “Hilo Verde Conecta: transformando el conocimiento en calidad rentabilidad” (“Green Thread Connects: transforming knowledge into quality efficiency”. Verónica Verdejo, who collected the award, talked about entrepreneurship. She stressed that starting up a new business “is possible and necessary”. On behalf of its team, she asserted that “they advocate for a low-cost technology that is accessible to everyone”.

Before the night’s main award, Francisco Pérez Bes, Secretary-General of INCIBE, gave his speech. Besides updating the attendees about the role and latest developments of INCIBE, Francisco seized the opportunity to talk about ENISE, the International Meeting on Information Security in which León UP will participate with a stand of León’s City Council. The stand aims to inform about what are the advantages offered by the city of León to cybersecurity companies.

The last award was to Pilar López Álvarez, President of Microsoft España, who comes from León and received the award for Talent and Leadership. In her speech she presented what she and her company think are the three keys to leadership: being clear, generating energy and ensuring success. To talk about talent, she quoted the English writer Doris Lessing, who stated that “talent is something quite ordinary. It is not intelligence that is scarce, but perseverance”.

The event ended with the speech on ICTs, Talent and Innovation by María Victoria Seco Fernández, Director-General for Telecommunications of the Castilla y León Council and the participation of Lucio Fuertes Soto, President of Aletic.

Aletic works for the development of activities closely related to the technology and computing sector in León and the rest of the autonomous community. It was born in 2004 with this goal, in which it still believes under its motto “The more of us, the more we will grow”.

Show your “soft skills” to advance your career

Leadership, team work and time management are some of the so-called soft skills that make professionals be better connected to their work environment. If you want to advance your career you need to bear in mind the skills known as “soft skills”. These are the most...
Read More

Enhancing the executive competences and skills to lead people in the management of projects is a valuable resource for companies The role of people in the companies and projects has changed. Therefore, companies must transform the way of managing staff. We find the...
Read More

From León to the world using an e-commerce platform

The international trade through e-commerce platforms is growing all over the world, and the Spanish companies play an essential role in online selling to any country in the world. In order for your business to grow at an international level thanks to the...
Read More

Innovation, design, trademark and technology in Foro Empresas León UP

The upcoming Foro Empresas León UP, held in the Conde Luna Palace on 28 November from 6 pm. to 8 pm. will focus on intangible assets, key for improved competitiveness growth of SMEs. One of the aims of this meeting is to inform the audience of the increasing...
Read More

What are the advantages of implementing the LEAN methodology in your SME?

The seventh session of Foro Empresas León UP took place on the 31st October. On this occasion we enjoyed the collaboration of Ricardo Catelli from Global Lean, who explained all the advantages entailed in applying the Lean methodology to León’s SMEs to over 60...
Read More

There is much talk these days about new technologies, and about the talent required to be integrated into future jobs for the implementation and development in such varied fields as big data, artificial intelligence, virtual reality and augmented reality, blockchain...
Read More

León’s Association of Technology Companies rewards the initiative of people and companies leading projects which are fostering the economic and technological development of our province. Last night, Aletic celebrated the second edition of the awards that bear its name...
Read More

Gastroemprendedores Edición Noroeste showcases all the opportunities, talent and successful entrepreneurs in León

The latest edition of Gastroemprendedores, initiative launched by the Spanish food accelerator Eatable Adventures, was held on the 15th of October in León, framed within the 2018 Spanish Capital of Gastronomy. The event focused on presenting the opportunities offered...
Read More

Foro Empresas LeónUP: 5 reasons why you should introduce LEAN Methodology in your company

Next 31 October from 6 pm. to 8 pm. in the Conde Luna Palace, all attendees will be able to know first-hand the advantages of applying LEAN methodology to optimise processes inside the company, thus reducing unnecessary costs. LEAN is a philosophy for the...
Read More

This event, organised for the second consecutive year by León Up, was an important meeting between young people and enterprises On Thursday 3rd October, students and young professionals learnt about job opportunities, degree programmes and future trends...
Read More